Notify me when back in stock

Please tick this box to proceed.

All three sizes are available in right hand-wired or wireless connection.

The wired versions are connected and powered via a 220cm USB cable.

The wireless versions connect via a 2.4Gz USB receiver and are powered by a AA battery.

The patented ergonomic shape supports the hand in an upright neutral posture that eliminates forearm twisting.

This positioning of the wrist reduces flexing and extension while mousing.

In the vertical orientation, the finger buttons are operated the same way and the sculptured thumb rest minimizes the effort required to use the mouse.

Innovated shallow grooves have been incorporated into the button design of the three-finger buttons.

Fingertips naturally rest in the grooves, securing the mouse in the hand, making cursor movement much more precise.

An extra-wide lip along the bottom edge prevents the last finger from rubbing the desk.

Smartly-placed thumb buttons are both within easy reach at the top and bottom of a contoured thumb rest.

These buttons can be programmed to complete different functions via the Evoluent Mouse Manager.

A speed button behind the wheel allows convenient adjustment without releasing your grip from the mouse.

The Evoluent Mouse Manager allows for several customization options that assist with reducing clicks, mouse movements, and having to reach for the keyboard.

All six of the D Series buttons can be configured and an additional level of customization is available for tasks in specific applications and programs while they are active.

The D Series has 3 finger buttons, 2 thumb buttons and a clickable scroll wheel.

The functions of these buttons can be programmed via the Evoluent Mouse Manager.

The force required for clicking is lower than traditional mice, reducing strain on the fingers while delivering tactile firmness that avoids accidental clicks.

The D Series uses a laser sensor, increasing the resolution of the image taken by the mouse.

Includes driver for Windows 7, 8 and 10 for configuring the buttons. The driver is optional but highly recommended. VerticalMouse still has basic functionality without the driver.

Includes Mac driver for configuring the buttons. The driver is optional but highly recommended. VerticalMouse still has basic functionality without the driver. Some functions of the Windows driver are not available in the Mac driver.

Fixed button functions without a driver. Third party drivers may be available from other vendors.

Be The First To Review This Product!

Help other Ergonomics101 users shop smarter by writing reviews for products you have purchased.

More From This Category 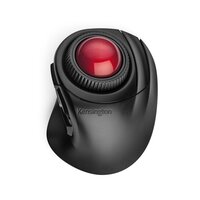 We are committed to ensuring that your privacy is protected. Should we ask you to provide certain information by which you can be identified when using this website, then you can be assured that it will only be used in accordance with this privacy statement.

We may collect the following information:

What we do with the information we gather

We require this information to understand your needs and provide you with a better service, and in particular for the following reasons:

We are committed to ensuring that your information is secure. In order to prevent unauthorised access or disclosure, we have put in place suitable physical, electronic and managerial procedures to safeguard and secure the information we collect online.

A cookie is a small file which asks permission to be placed on your computer's hard drive. Once you agree, the file is added and the cookie helps analyse web traffic or lets you know when you visit a particular site. Cookies allow web applications to respond to you as an individual. The web application can tailor its operations to your needs, likes and dislikes by gathering and remembering information about your preferences.

We use traffic log cookies to identify which pages are being used. This helps us analyse data about webpage traffic and improve our website in order to tailor it to customer needs. We only use this information for statistical analysis purposes and then the data is removed from the system.
Overall, cookies help us provide you with a better website by enabling us to monitor which pages you find useful and which you do not. A cookie in no way gives us access to your computer or any information about you, other than the data you choose to share with us.
You can choose to accept or decline cookies. Most web browsers automatically accept cookies, but you can usually modify your browser setting to decline cookies if you prefer. This may prevent you from taking full advantage of the website.

Links to other websites

Our website may contain links to other websites of interest. However, once you have used these links to leave our site, you should note that we do not have any control over that other website. Therefore, we cannot be responsible for the protection and privacy of any information which you provide whilst visiting such sites and such sites are not governed by this privacy statement. You should exercise caution and look at the privacy statement applicable to the website in question.

You may choose to restrict the collection or use of your personal information in the following ways:

If you believe that any information we are holding on you is incorrect or incomplete, please write to or email us as soon as possible at the above address. We will promptly correct any information found to be incorrect.

Select Afterpay as your payment method

Use your existing debit or credit card

Complete your checkout in seconds

All you need is:

1) A payment card; 2) To be over 18 years of age; 3) Resident of country offering Afterpay